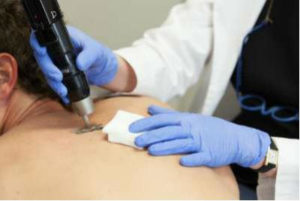 OK, so that little dude tattoo was an interesting character on that old show Fantasy Island. He was definitely more interesting than his namesake will be in about 15 years on your shoulder, back, arm, or other body part.

Tattoos have had their day in the sun, to be sure. Some people have gone all in, opting to have their entire shoulder, upper back, and arm made into a design of a dragon flying down off the mountain, wreaking havoc on all below or something equally, uh, artistic.

The problem is that with the natural sagging and loosening of your skin due to decreasing collagen and elastin levels, one day that dragon will probably more closely resemble a duck-billed platypus.

Maybe it’s time to have Dr. Kronberg laser it away!

How were tattoos removed before?

It used to be that there were only three ways to get rid of a tattoo in the old days: surgery to remove the skin, acid bleaching, and dermabrasion (basically sandblasting of your skin). While all of those methods sound fun, they left some serious scarring, and were pretty painful.

Fortunately, technology has come to the rescue in the form of the laser. Lasers can remove any tattoo, returning your arm, neck, shoulder, calf, or wherever to its pre-tattooed appearance. Often two different lasers or light wavelengths are required to remove a tattoo, depending on the number of colors involved.

How does it work?

Dr. Kronberg uses a Q-switched laser to deliver quick high-energy pulses that are absorbed by the pigment in the tattoo. The energy breaks the pigment into particles small enough that they can then be cleared from the body by the lymphatic system.

A series of appointments are necessary, depending on the colors of your tattoo. With each appointment, the tattoo becomes lighter and lighter.

Now many treatments are necessary?

Just how easy or hard it is to remove a tattoo is predicated on the number of colors, depth, age, chemical composition of the inks, and other factors. Black, red, dark orange, and dark blue tattoos respond quickly, while certain other colors such as green, purple, brown, and light colors take more time. Most tattoos require a number of treatments spaced from six to eight weeks apart.

Tattoos generally take from 3 to 13 treatments to go the way of the platypus.

The procedure has a little discomfort, but not much. We apply an anesthetic cream to the location prior to beginning the laser treatment. After each treatment, you will have three to four days of sensitivity at the site. You’ll also need to apply an over-the-counter antibiotic to the site and keep it covered.