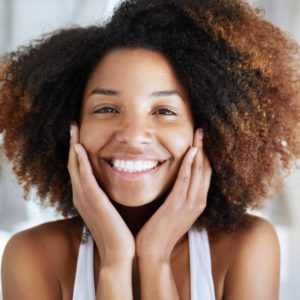 Some people think they have a ruddy complexion. Others think they must have forgotten to put on sunscreen and got a light sunburn. Others wonder if it’s that extra drink they had last night. On a hot Houston day, it’s even easy to think it’s just the heat.

Rosacea is a word that never even crosses the minds of most people. But it probably should — it’s estimated that 14 million Americans have rosacea. Most of them just don’t know it.

But Dr. Kronberg can spot it and can help you deal with this skin condition.

Rosacea is a common skin disorder that usually affects the skin on the face. It shows itself in redness on the nose, chin, cheeks, and forehead. It starts as simple redness, as if blushing, but if left alone rosacea can develop into a more ruddy redness.

While usually on the face, rosacea can also appear on the chest, back, or neck. It can even affect the eyes, making them appear bloodshot and watery. Rosacea can lead to solid red bumps and pus-filled pimples.

Rosacea remains somewhat of a mystery, its exact cause unknown. One line of thinking holds that rosacea is a disorder of the blood vessels. Other theories involve microscopic skin mites, fungus, psychological factors, and a malfunction of the connective tissue under the skin.

Although symptoms of rosacea vary greatly between people, the condition will always include at least one of these primary signs:

Diagnoses and treatment of rosacea

While there is no specific test for rosacea, Dr. Kronberg is very familiar with the disorder. Treatments are individual, but include medications, both oral and topical, to bring the condition under control. Procedures can be performed to remove visible blood vessels and lessen reddening.

There are also a series of triggers that should be avoided. When in our offices discussing your condition, Dr. Kronberg will walk you through things that can trigger your rosacea.

Wonder about that redness that seems to come to your face more often than not? It could be rosacea. Call Dr. Kronberg at (713) 771-8941 and let’s check it out.

Don’t Forget About Botox
Melanoma and Our Houston Sun